Metatron Cube and Eve’s Grid and The Tesseract

I recently meditated on the subject of my writing. During this session I had a vision. I would like some clarification on this, if possible. I saw what appeared to be a rectangle with a triad on the top and bottom. It came in very slowly, then I realized it was more than two dimensional.
I began to see sacred patterns within this symbol (five pointed star, Initiates Star, etc). It appeared to be a dodecahedron _ picture like Eve’s Grid. It began to spin, it spun so fast, it collapsed into a thin line and flashed and appeared to disappear. The flash of light moved toward me. My thought was, I am so happy, finally, it’s happening. I sensed that this was some agreed upon venture of long, long ago. I remember saying, I have prepared a place. The flash of light then moved inside what appeared to be my pituitary gland, illuminating the room. Then behind it came four more. Then it shot down my spine to my heart and outside in ripples to what appeared to be infinity. I got an impression of 4 to the 10th, as a mathematical equation of energy. That was the beginning of the energy moving within my sphere. I was told that this was only the beginning. That this would continue, as long as I would allow and there are many working with me to understand and write about these experiences. When I told a friend that I thought this was connected to sacred geometry and energy elevation, exponentially, she suggested I write to you. If you can help clarify any of this for me, I would be grateful. If you can point me in a direction, I would be grateful. I wish to work with this energy, yet I feel I need more information.

There is a little information here that may pertain to your individual circumstances.

Perhaps you can see the rectangle with the triad on top and bottom. It is part of the cube nested within a cube.

Metatron’s Cube is the incubator of 3D. It represents a box within a box or a cube nested within a cube.

The Tesseract represents a process in which one might peer into the fourth dimension. The drawings of the Dodecahedron – Eve’s Grid and the Tesseract are basically the same geometry except that the Tesseract is tilted so you might better define the six sections.

Outlined in red is one of the six sections. The idea is to go into the outlined area and see it as a cube. Once you have visualized being inside the cube, it represents the cube of 4D. Click on one of the Tesseracts to get a larger image for visualization.

It often takes a student several tries to actually get inside the 4D cube. The larger image works much better than the small one. If you have difficulty after a couple of days, perhaps stop for a few days and try again. It took me several attempts to see it the first time.

Seeing the cube within a cube dimensionally leads one to consider the nature of the Holographic model. It has the nature of being exactly the same structure if you were to tear off a piece from the edge. The integrity of the geometry would be maintained infinitely. The image below could be that of the corner you just ripped off the edge. 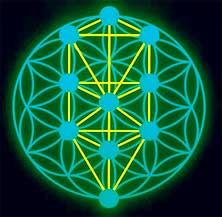 Above, we see that the Tree of Life is contained in Metatron’s Cube/Grid. The view above comes from the Seed of Life, therefore metaphorically, the Tree is contained within the seed, and is a fractal property from the beginning.

The Tesseract is an important artifact in the Marvel Universe. Read more at http://marvelcinematicuniverse.wikia.com/wiki/Tesseract

Find a complete list of promo codes for Ladbrokes here.