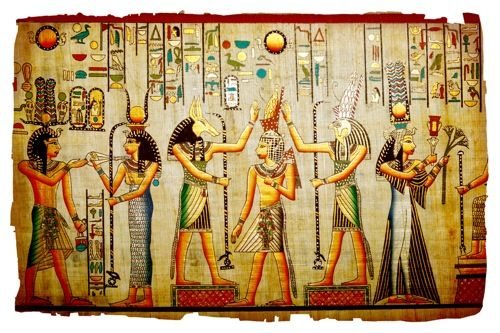 What are we to make of this strange story with its curiously flat revelations? Our very earliest alchemical text presents us with the same problems and ambiguities that we will find throughout the entire alchemical corpus. There seems to be something in the very subject itself that forces its images toward the surreality of pathological metaphor. Is it merely diseased imagination or are there meanings beneath the fantasy?

Marie-Louise von Franz , one of Carl Jung’s disciples, thought that this story in particular represented the emerging anima, of the individual and of the world itself. In her 1959 lecture on Alchemy at the Jung Institute, Ms. von Franz notes that “we can recognize the symbolism of the anima, for the story of Eve is even more true for the anima than just for women, and here there is the same idea expressed symbolically from the unconscious. The goddess Isis has beside her the sign of the moon. In these late times, Isis was identified with Hathor, the cow goddess and the moon goddess, and the sky goddess Nuit.”

Ms. von Franz then goes on at great lengths to explicate the life giving power of the divine female, drawing a connection between instinct and archetype. From her discussion, it is hard not to see the basic alchemy of the psychological process, the internal darkness of the “black,” as somehow a psycho-sexual one. In that sense, we can recognize the internal component of Alchemy, the key to the lost science of the last epoch, as essentially sexual.

Perhaps this accounts for the ambiguity of the metaphor, its insistence on the transubstantiation of the ordinary into the sacred. Even Ms. von Franz lapses on occasion into a kind of guarded incomprehensibility, as if she dared not say it too openly.

With all of this in mind, we can see that “Alchemy” points to the ancient science, as revived by the Egyptians, and to the darkness of the unconsciousness where powerful psycho-sexual forces can be encountered and used in the process of transformation. Egyptian science, with its concern for stellar movements as the background of mythical dramas, points us another step down the road toward solving the mystery.

We will return to the story of Isis and the angel, the origin of “alchemy” in so many ways. But first, we need to briefly follow the trail of those who held this information, the Hru Shemsu, the Followers of Horus, the Widow’s Son.

According to Mantheo, the 2nd century Egyptian historian, the Hru Shemsu were the pre-dynastic rulers of Egypt. The Builder Texts of the Horus Temple at Edfu call them “Blacksmiths,” — literally “metal-makers” — and declare that all human knowledge came from their endeavors. They invented the institution of Kingship, and every Pharaoh from Menes to the Emperor Trajan ruled Egypt in their name. The winged disk was their symbol and a special ceremony, “The Union of the Disk,” was held once a year in every temple in the land to symbolize the union of the state with the source of Egyptian civilization.

A multi-volume work would be needed to tell the story of the Hru Shemsu during the course of Egyptian history. The high points include the early dynastic conflicts between the kings ruling in the name of Horus and those ruling in the name of Set; the role of Edfu in the rise of Middle Kingdom Thebes; the defeat of the Hyksos and the founding of the New Kingdom; the Sphinx and Thutmose IV; the rule of Herihor, High Priest of Thebes and Edfu; the 26th Saite Dynasty renaissance; and the opening of Egypt to Greece and later Rome under the Ptolomeys. Through three thousand years of history, the thread of the Hru Shemsu stands out, clearly interwoven with the basic themes of Egyptian culture and its lost science.

With the coming of the Roman Empire and then the Imperial Christian Church, the old religion and culture began to melt away. However, it did not simply disappear, but was absorbed into the spiritual background of the new, emerging mass mystery religions. Christianity in particular was aided in its growth by its similarity to the Isis cult which preceded it. Alexandria, one of Alexander’s new cities, epitomized this new Egypt and became the center of learning in the late classical world. Alchemy, in a recognizably modern form, seems to have developed in its workshops and academies as the Isis story from the Codex Marcianus demonstrates.

The author of “Isis the Prophetess” was probably an Alexandrian Greek who lived somewhere between 50 BC and 50 AD. He was familiar with Hebrew angelology, seems to have understood the importance of his material, and, above all, was trying to communicate something very specific, like a recipe. Undoubtedly, he considered himself one of the Followers of the Widow’s Son, the Company of Horus.

In another century or so, this would become a Christian metaphor, with Jesus in the role of Horus. The Gnostic Christians of Egypt were a powerful force in the early Christian movement. It wasn’t until the fourth century, when the church became an organ of the state, that gnostic forms were driven underground. In these intervening centuries, gnostic ideas had traveled throughout the Roman empire, reaching southern France and the west coast of England. As Christianity became an organized orthodoxy, these earlier forms were persecuted.

The Coptic or Gnostic Christianity of Egypt tried to retain the inner core of the ancient Egyptian wisdom, while discarding everything that did not fit a Christian mold. It succeeded enormously well, creating an image of the very essence of the mystery in the symbol of the Rose Cross.

On the walls of the Coptic Museum in Cairo, it is possible to trace the evolution of this symbol through the first and second centuries. Beginning with a first century gravestone, from Luxor, which contains the combination of a Chi-Rho emblem and the anhk with the solar boat, we move rapidly to anhk crosses which blossom into roses on the loop of the anhk. By the second century, this has become the accepted rendering of the cross as a mystical symbol. In this we have a connection with the esoteric side of the Coptic tradition which managed to survive the shift to orthodoxy. These rose crosses traveled along with gnostic concepts, throughout the Empire.

As the Empire fell apart in the fifth and sixth centuries, the various groups of Gnostic Christians were left stranded. Like limbs withering away from a dying tree, the Gnostic centers of Alexandria and the east lost touch with the west. There were brief flickerings of a new gnostic culture in the west — the failed attempt at restoring the Empire by the historical “King Arthur,” Rhiothamus, King of the Britons, for example — but for the most part it was a very dark age. In the seventh century, the breeze from Arabia, the new force of Islam, blew the old cultures away and conquered half the known world.

With the coming of Islam, the darkness lifts slightly, and we see that Arab scholars have rediscovered the Greeks, long since lost to the west. Jabir, in the eighth century, collected the ancient alchemical wisdom into a volume that became the cornerstone of all future alchemical research. The Sufi alchemists of the tenth and eleventh centuries collaborated with the Kabbalists of Spain, and reestablished medicine and philosophy.

By The Crusades, The Arabs were far ahead of the west. A few of the Crusaders, most prominently the Knights of the Temple, were smart enough to know this and learned all they could from Arab culture. Part of this learning contained the secret knowledge. This knowledge became the focus of a spiritual revolution back in Europe. Great churches in a new style, the Gothic Cathedrals, sprang up, influenced and in some cases financed by, the Templars.

When the Knights of the Temple were destroyed in the early fourteenth century, many of their manuscripts found their way onto the esoteric market. This triggered an up-surge of interest in hermetic subjects. And so began the great age of individual alchemists, starting with Nicholas Flammel and his wife. By the early seventeenth century, when the Rosicrucians appeared, alchemy had become accepted, if still somewhat suspect. In the next hundred years, practical alchemy became chemistry and the inner core of the secret knowledge became the property of the Freemasons and the occultists.