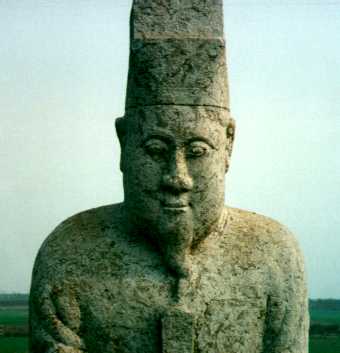 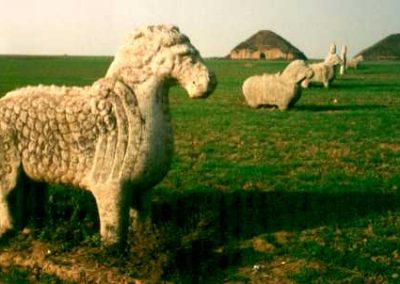 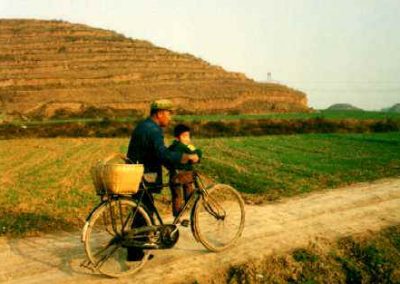 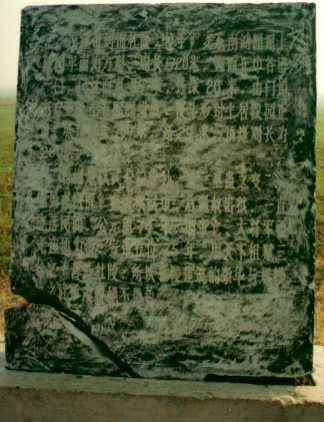 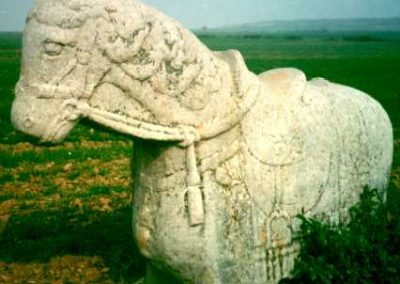 Emperor Liu’s Group Tomb () lies at RuanAn () in the South East of China above HongGuYuan( – a place in NingXia). The (temple garden) has an even surface because of it’s rectangular shape. The dimensions are vast. It has a circumference of 1720 meters, there are four sides, each of which have a single door. The location of each door is 85 meters wide and 20 meters deep because of this, the doorway on the left and right is filled up with material to join the porch section.

The bottom has a circumference of 700 meters and a height of 29 meters. The perimeter of the top edge is 200 meters.

LiuXun was the great grandson of the Han Army’s Emperor. He became deranged and then was imprisoned. Because of this “witch insanity” he was swaddled. LiXun endured it and then was released from prison.
After he was released from prison he drifted endlessly from place to place among the common people. Then suddenly, in 74 BC seven Generals welcomed the illustrious Emperor Liu and he stayed there for 25 years. During this time, he used land taxes and one third of his army to build the group tomb. As a result the group tomb building’s luxury and scale can not be compared to the military emperor’s luxurious tomb.

According to the source that I received this tablet from it was ancient Chinese. However, an initial glance at the tablet clearly tells that it is not ancient Chinese. The form of Chinese characters written on this stone tablet are simplified Chinese, they’re not traditional characters nor are they Seal Bone Script. So I could conclude two things. One, it’s just a fake. Simplified Chinese Characters were not even devised until after the Cultural Revolution in the 1930’s. That would make the stone tablet old, but not ancient – certainly not original. The second conclusion is that there was an original stone tablet that had either Seal Bone Script or Traditional Chinese Characters, however it maybe was badly damaged, and then they decided to make a new one that had a more common script on it that could be read by modern Chinese people. It is common for Chinese artisans even today to carve stone tablets similar to this one. They usually are tombstones that go on graves. The only way to validate if the story about Emperor Liu is correct or not would be to search through some Chinese history books. I’m sure that if an emperor of China had spent so much time and money decorating and already existing tomb, then there certainly should be references to him in other historical archives.

In the text there are a few words that are unusually difficult to translate properly. The first of which is something called “Witch Insanity” (). In the time period, Esoteric practices were often practiced in secret, and often without supervision. It’s well known that practitioners of certain types of Qigong and Yogic meditation try to self-study advanced techniques without the supervision of a teacher can develop certain kinds of mental illness, or even trigger a dormant epileptic condition. Another translation of this word can also mean “Witch Madness”, which probably just means “going crazy”. In either case it seems to be along the lines of insanity. Insanity or mental illness seems to be the best choice within the context (despite the cultural reference to Witch Insanity) because the story goes on to say that he was Swaddled. If you are not familiar to swaddling, it means wrapping the body with a long cloth so that the limbs can not move. In modern days, we call this a straight-jacket.

Assuming that this text is accurate and authentic, it leaves one question on my mind – who built this monument? In the text it mentions how he used one-third of his army and his land taxes for area-beautification, however, no where in the text does it ever imply that he built the tomb. If he was invited there by 7 generals in or around 74 B.C., that means it had to be built much earlier than that. One should keep in mind that the Great Wall of China wasn’t constructed, or even started to be constructed until 220?206 B.C. Obviously, this monument has been there a long time. One could imagine that it could quite possibly take several generations to build such a structure. So far, this cap less-pyramid has never been excavated. Much remains unknown.

The Great White Pyramid of China 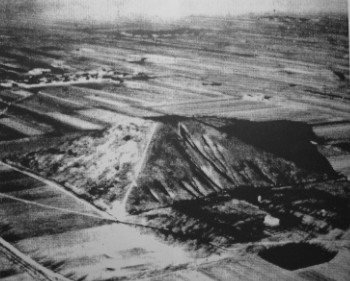 In 1978 the New Zealand researcher Bruce L. Cathie bothered itself of a clarification of the puzzle. According to some correspondence with the Chinese embassy and the US air force he kept up the photo of 1947. He published the picture later in the first edition of his book “The Bridge to Infinity” of 1983. According to the photograph and the reports, the New Zealand researcher estimate that the pyramid must have at their basis a length of 450 meters (1500 feet) and a height of about 300 meters (1000 feet).