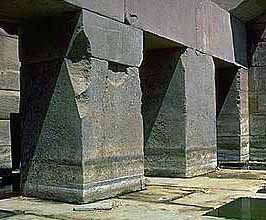 On the west bank of the Nile, 90 miles (145 km) north of Luxor, lies the Temple of Abydos near the small village of El ‘Araba el Madfuna. The Temple dates to around 3150 BC. This area, sacred to Osiris, was a powerful location to those who believed in the next world. The ancient Egyptians said that at sunset, the area looked like a golden staircase leading to the afterlife.

It was here that Osiris, after being killed by his brother Seth, returned to power. Seth had killed Osiris and scattered the pieces of his body all over Egypt. Osiris’ wife and sister, Isis, gathered the pieces and put them back together, thus restoring life to her husband. It was said that Abydos was where the final piece, his head, was buried, and so it was here that Osiris was brought back to life to become the judge of the dead and lord of the netherworld. 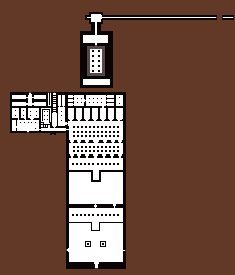 The Osirian at Abydos is the uppermost area on the map with the younger Seti-I Temple located below it. As Seti-I began the search for a location for his Temple, he was lead to a location north of Luxor in the bend of the River Nile. There he began to dig the foundation for his Temple. What he discovered was the Osirian, or the Ancient Temple of Osiris. Whether he actually knew that the Osirian was there, perhaps we will never know, but upon finding this Ancient Temple in the path of his new Temple, he turned his new Temple to the left. It is the only Temple in Egypt that makes an ‘L’ turn.

Here we see the very front of the Seti-I Temple in ruins. Behind it we will discover the Osirian.

Like the rest of Egypt, the Djed has many names like the Djed Pillar, Tet Pillar, or the Pillar of Osiris. According to varied accounts, it was raised for the first time at the Osirian complex at Abydos.

The Djed is a pillar, a type of the World Tree, representing stability, continuity, and regeneration. The Festival of The Raising of the Djed dates back more than 5,000 years to predynastic times–as does the Egyptian Book of the Dead which identifies the Djed as both the backbone of Osiris and the support and backbone of the universe. The Djed, however, is more than just an object; it is a mythic complex that existed long before Osiris emerged from the dark realm of the collective unconscious.

Historically, the Djed was raised at crucial transitional times between cycles, evoking light and stability to dispel darkness and disorder. Such periods were the Winter solstices, the failing years of a reigning monarch or the coronation of a new one. However, according to the texts of the Temple of Horus at Edfu, the Djed served its greatest purpose and revealed its greatest mystery at the ending of one world age and the beginning of another. This is such a time!

The Djed is the supreme unifying symbol of all polarities, connecting us to the transcendent reality of the whole, the One. It symbolizes the macro and microcosmic “axis.” As the cosmic axis the Djed is the “cylinder,” the column of light linking the Earth to the pole star. It represents stability because it aligns the North pole of Earth with the the still-point of the revolving “dome” of the heavens–the pole star. Beyond the pole star were/are the realms of the “gods” and higher dimensions of being. In the microcosm, withinus, the human axis is the spinal column, the time-tunnel of the transformative journey from the gross materialism of homosapiens to the Self-realization of homoChristos at the crown chakra. It is through this chakra that we, too, are aligned with the energies of the pole star.

Seti I, the second king of the 19th Dynasty was the son of Ramesses I and Queen Sitre. He reconciled with the Hittites who were becoming the most powerful state in the region. Seti I and his heir, Ramesses II campaigned against Kadesh. In Karnak he completed his father’s plan by converting the court between the second and third pylons into a vast hypostyle hall. He built his vast mortuary complex at Abydos. Seti-I tomb in the Valley of the Kings where he was finally entombed was vandalized and his body was relocated to Deir el Bahri. The mummy of Seti I was found at Dayru l-Bahri in 1881.

This round-topped stela of King Djet, the 4th King of Dynasy 1, was probably originally erected on the east side of his royal mastaba tomb. It was found in a royal necropolis at Abdyos, where most kings of the Dynasty 1 were buried. It was created circa 3000 B.C. of limestone, a relatively soft stone. The Horus falcon perches on top of the rectangular serekh, which contains the hieroglyph of a cobra, the actual name of the king. (Uadji? Djet?)

One inhabitant of ancient Egypt made the pilgrimage to Abydos to see and participate at the Osirian; Ikhernsfret, and he wrote: “I celebrated the Procession of Upwauet when he proceeded to champion his father…I repulsed those who were hostile to the Neshmet barque, and I overthrew the enemies of Osiris…I followed the god in his footsteps…I sailed the divine barque…I equipped the barque called Shining in Truth of the Lord of Abydos with a chapel…I led the god to his tomb…I championed Osiris on that Day of the Great Battle, overthrowing all the enemies on the shore of Nedyt…I caused him to proceed to the barque, and it bore the beauty of Osiris…I gladdened the heart of the eastern highlands and knew the jubilation of the western highlands when they saw the beauty of Osiris upon the barque…the barque landed at Abydos and we brought Osiris, First of the Westerners, Lord of Abydos to his palace…I walked with Osiris.” 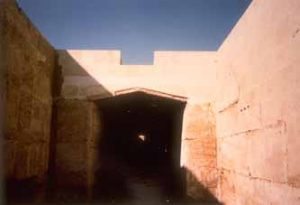 The structures built by the successors of Aha in the First Dynasty lie to the west. The structure which King Aha built at Abydos was similar to those of the Late Predynastic Period, but built on a far grander scale. This is perhaps indicative of the increasing wealth available at the beginning of the First Dynasty.

The goddess Heket, who was represented in the form of a frog or with a frog’s head, was worshipped especially in the town of Her-wer as the female complement of Khnum. Together with other gods she assisted in fashioning the child in the womb and presided over the birth in her capacity as midwife. She made her debut into the Egyptian pantheon in pyramid inscriptions, in a magical text destined to allow the king to ascend into the sky.
Khnum

Women often wore amulets of her during childbirth. As the daughter of the sun-god Re she is called ‘Eye of Re’ and ‘Mother of the gods’. She is regarded as the consort of Khnum. Sometimes Heket was taken as a form of Hathor, and called the mother of Horus the Elder. On account of her life-giving powers she was classified at Abydos among the Osirian family of deities. Depictions of later times show her present at the posthumous conception of Horus. 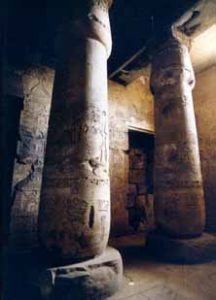 The staircase of the temple of Seti I at Abydos leading to the terrace – and, thus, the Osireion – bears an address in 43 columns of the goddess Seshat to the king (KRI I, 186-188). The text displays a rigid scheme which deals with the temple itself and its two groups of occupants (the king and the gods) and in which pseudo-verbal/ temporal aspects and non-verbal sentences/ a-temporal aspects alternate.

The author demonstrates that the three main elements, temple, gods and king, have each their proper place in the sophisticated and complicated structure of the text. The address consists of three parts. The first concerns the temple, its conception and its realisation. The second presents the gods who live there and guarantee its sacral nature. The third part is devoted to the king, the celebrant par excellence, who certifies its functioning. This last part has a very intricate structure, with reference to the Horus and solar aspect f the king, the Osirian aspect, and the relationship between the two. At the conclusion of the address Seshat speaks, in order to fulfil her usual task of registering the divine kingship of the pharaoh as living Horus, according to the orders of Re and the decree of Atum. 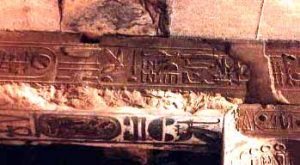 This hieroglyph in the Temple of Seti I at Abydos which shows apparent helicopters, and submarines, are perhaps where an inscription has been written more than once. As the plaster fell away, it looks like modern craft. 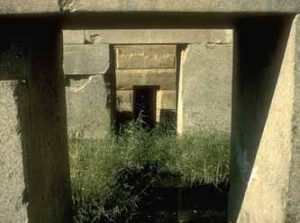 Amenhotep III, with his taste for antiquities, ordered the royal necropolis of Abydos to be cleared, and his subjects were told to find the tomb of Osiris. They claimed to have found the tomb, although in fact it was the tomb of King Djer (ca. 2800 BCE).

Djer was the third king during the 1st Dynasty, when the crown still resided at Memphis. He was the son of Aha and one of his lesser ranked wives, a woman named Hent.

There are something called “tenets” – which were the basic “Tenets of Original Wisdom” that have been handed down through the ages. These tenets have become distorted and blended together in many other teachings to the point that they are almost unrecognizable as the original tenets.

There were Temples of Direct Experience, about which we’re speaking now, which allowed the initiates the highest levels of personal mastery. Once that was accomplished, there were Temples of Knowledge of which Abydos and the Osirian complex are very good examples. 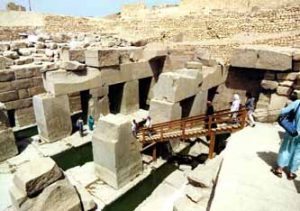 Red Aswan granite pillars, each weighing about a hundred tons support equally massive archways. This temple was built as a symbol of Seti’s closeness to Osiris and contains a sarcophagus, though Seti was not buried here.