The Eyes of Horus

The Eyes of Horus

“Let the Eye of Horus come forth from the god and shine outside his mouth.” The Pyramid Texts

Horus “who rules with two eyes”

In ancient Egyptian mythology, Horus was one of five offspring of the original pair of Egyptian gods, Ra and Rhea. Horus’ siblings were Osiris, Set, Isis, and Nephthys. Osiris succeeded Ra as king of Egypt and married Isis, his sister. Their brother, Set, slew Osiris, who descended to preside over the land of the dead. The widow, Isis, called upon her brother, Horus, to destroy Set, which he did after many battles. Eventually, Osiris was resurrected.

Horus as now conceived is a mixture of the original deities known as “Horus the Child” and “Horus the Elder”. As the Child, Horus is the son of Osiris and Isis, who, upon reaching adulthood, becomes known as Her-nedj-tef-ef (“Horus, Avenger of His Father”) by avenging his father’s death, by defeating and casting out his evil Set. As Horus the Elder, he was also the patron deity of Upper Egypt from the earliest times; initially, viewed as the twin brother of Set , the patron of Lower Egypt, but he became the conqueror of Set.

Later in his campaigns against Set, his father?s murderer, he was known as Hartomes, ?Horus the Lancer?, and by this time he had almost completely assumed the identity of ?Horus the Elder?.

Harakhte meant the god on the horizon: Horus was the first state god of Egypt, but in early times he appears to have become so confused with Ra that the two gods exchanged places, with Ra eventually becoming known as Ra-Harakhte.

In the Ancient Egyptian measurement system, the Eye Of Horus represented a fractional quantification system to measure parts of a whole. The entire eye measured 1 heqat. And each of the parts of the eye measured fractions of the heqat. 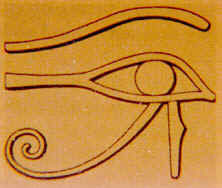 The Right Eye of Horus represents concrete factual information controlled by the left brain. It deals with words, letters, and numbers and those things which are describable in terms of sentences or complete thoughts. It approaches the universe in terms of male oriented ideation. 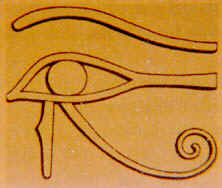 The Left Eye of Horus represents abstract aesthetic information controlled by the right brain. It deals with esoteric thoughts and feelings and is responsible for intuition. It approaches the universe in terms of female oriented ideation. We use the Left Eye, female oriented, right side of our brain for feeling and intuition.

“…the Eye of Horus hath made me holy…I will hide myself among you, O ye stars which are imperishable. My brow is the brow of Ra.” The Pyramid Texts

1/16 heqat represents the ear. The figure points towards the ear on the face.

“That which has been shut fast [dead] hath been opened by the command of the Eye of Horus, which hath delivered me. Established are the beauties of the forehead of Ra.” The Pyramid Texts 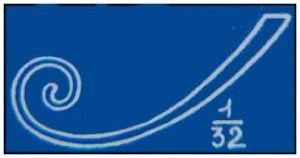 1/32 heqat part of the EYE represents the sprouting of the wheat or grain from the planted stalk. It represents food and taste.

“Come, the Eye of Horus hath delivered for me my soul, my ornaments are established on the brow of Ra. Light is on the faces of those who are in the members of Osiris.” The Pyramid Texts

1/4 heqat represents seeing, or the sensation of light.

1/2 heqat represents the nose and the sensation of smell.

“Behold [the fire] risith in Abydos and it cometh; I cause it to come, the Eye of Horus. It is set in order upon thy brow, O Osiris Khenti-Amenti; it is set in the shrine and riseth on thy brow.” The Pyramid Texts

1/64 heqat represents planting a stick into the ground.

“I shall see the Gods and the Eye of Horus burning with fire before my eyes.” The Pyramid Texts

As you examine the concept, the idea of weights and measurements begins to make more sense, that is until you add the fractions of the heqat together. They add up to 63/64ths.

Read more about the Eye of Horus at https://en.wikipedia.org/wiki/Eye_of_Horus

Play Cleopatra slots and other online games for free with one of the new player bonuses found at BonusCodeCasinos.net.

What a cliffhanger!!! Any more information concerning the heqats and further symbolism will be greatly appreciated!!!

Best summary of the info I was looking for, thank.

I am thankful for the information.It reaffirmed what was previously taught to me