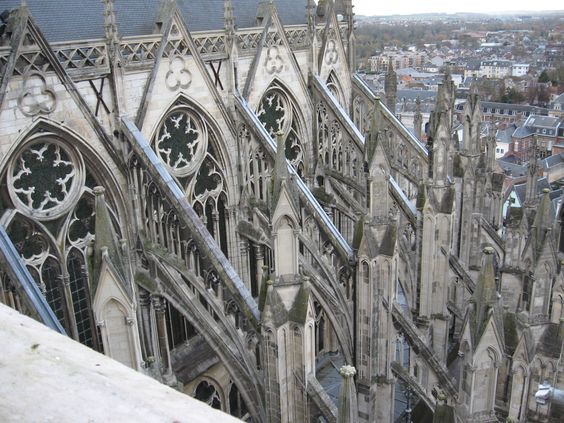 A few years before the Order of Sion disavowed the Knights of the Temple, one of its members began receiving a series of visions that changed how the west viewed the End of the World. Joachim of Flores was born of the minor nobility in Sicily around the time Abbot Suger began the renovation of St. Denis. In the mid-1160’s he went on pilgrimage to Jerusalem where he became converted to a deeper understanding of mystical Christianity. After a few years as a hermit on Mt. Etna, Joachim returned to Italy, joined the Benedictines and became a chronicler at Sion’s influential monastery of Casamari (House of Mary) in Calabria.

His visions began around 1183 and soon after he was summoned to Rome by Pope Lucius III and encouraged to record his visions and his theories. From this recognition, Joachim became a star, the most authoritative spokesman of his age on the imminent last days. He felt that his knowledge and visions imposed a heavy sense of obligation to spread the news of the impending apocalypse. In the next 18 years, he would be consulted by four Popes, as well as Kings, Queens and Emperors. In spite of this acceptance during his life, after his death in 1202, the Church condemned his views and his writings. Since that time, Joachim has been treated as a saint and as a heretic, but his view of the End of the World retained its popularity in esoteric circles down to the 20th century.

Joachim’s vision encompassed a complex view of time and history. He divided time into three overlapping states or ages. The first is the age of the Father, which began with Adam and ended with Christ’s death on the cross. The second, the age of the Son, began with the later Old Testament prophets, attained a climax with the life of Christ, and will last until the victory of the Anti-Christ. The third age, that of the Holy Spirit, began with the rise of the monastic orders in the sixth century and culminates in the last days. The Third Age will last until the End of the World.

Convinced that political events, such as the schism in Sion, the encroaching power of the Roman Orthodoxy and its struggle with the Holy Roman Empire, portended an imminent close of the second age, Joachim retreated to his own mountain-top monastery on Mount Nero, high above the Sila plateau in northern Italy. There he was consulted by the great of his era, including Richard the Lion-Hearted. Joachim told Richard that the Anti-Christ had already been born. Given that the date, 1191, was roughly the time when Tamujin began his rise to become the Genghis Khan of the Mongol horde, Joachim may have been right.

His calculation placed the end of the second age at around 1260. By this date, 58 years after Joachim’s death, several apocalypses, such as the fall of Constantinople to the Fourth Crusade, the crusade against the Cathars and the conquest of the Middle East by the Hordes of Genghis and his sons, had happened. Eighty seven years after Joachim’s target date, the worst apocalypse since Noah’s flood swept over the world.

The Black Death was a disaster of unparalleled magnitude. Even now, we have nothing with which to compare it. The influenza epidemic at the end of World War I killed almost 2 million people. Added to the death toll of the war itself, we have just a little over 10 million deaths between 1914 and 1920. Horrible as this is, it is little more than a third of the toll for the first wave of the Black Death in Europe alone between 1347 and 1350. It would take the mechanized slaughter of the Second World War to approach the world wide Black Death totals. Only the actuality of a nuclear war could top its destructiveness. To even think about the Black Death is to contemplate the unthinkable.

To those who lived through it, the Black Death seemed worse than any day of judgment, because the good and evil, the just and the unjust, died just the same. The very virulence of the plague struck at the heart of civilization. Survival lay in rejecting compassion, of any kind, and embracing isolation. Civil and social ties broke down under the weight of so many dead; governments fled, parents turned from their dying children, priests no long celebrated Mass for the dead or tried to comfort the living, and only the poorest of the poor could be induced to handle the disposal of the ever-mounting pile of dead.

The most important casualty of the plague, however, was the Church itself. The institution survived, but something vital was lost. The omnipresent belief in God so important to the medieval mind could not survive the baffling problem of God’s relationship to the horror. Prayers and the intercession of saints and relics had no effect on the plague, while quarantine, hygiene and isolation did. This simple observation shook the religious foundations of medieval society to its very core. The recurrence of the plague every 11 years for the next half century led many to believe that evil, in the form of the Devil, was gaining the upper hand.

Within the Church this realization played itself out in several unfortunate ways. Secular power and political control slowly replaced its spiritual motivations, until in the next century, freebooters such as Rodrigo Borgia, Alexander VI, could seize control of the Papacy and carve out a kingdom in Italy for his children. Between the Black Death and the Renaissance lay the Great Schism, a period of rival Popes and rival Cardinals split along political lines, with France, Spain, Scotland and Cyprus on one side and Germany, England, Scandinavia, Hungary, and Poland on the other side. And, through it all, The Inquisition continued to grow.

A product of the crusade against the heretical Cathars in southern France, the Inquisition had become an institution by the mid-13th century. After the Black Death, the power of the Inquisitors grew until they became, in their own view, the front-line shock troops in the Church’s war against the forces of the Devil. Evil had become overwhelmingly powerful and must be fought by any means necessary, including the incorporation of evil itself, in the form of torture and violence, to the service of good. Both sides of the Great Schism supported the Inquisition, which, by the late 15th century, had become the real power behind the Church’s authority.

However, both the secularization of the Church and its rigid and inquisitorial enforcement of its dogma were symptoms of an even deeper rooted problem — dualism. Christianity had never solved the problem of evil. Why did a good and omnipresent God allow such evil to exist? Perhaps God wasn’t omnipresent after all; perhaps the Devil, the locus of evil, was the equal of God and might even win the contest? Just as this fear drove the Inquisitors to burn sinners’ bodies for the sake of their souls, it turned others toward awe and worship of evil for its own sake.

It is important to realize that heretical forms of Christianity, The Cathars and so on, and pagan survivals such as the witch cults are not what we mean when we speak of worshipping evil for its own sake. While devils and demons had long been a part of the medieval psyche, only after the Black Death did the Devil become powerful enough for anyone to seek his favor. In the late 14th century, as the Black Death swept back and forth across Europe, a formal inversion of Christianity developed, substituting the Devil for Christ. (The Hebrew Satan, derived from the Egyptian Set, is actually the twin of Christ, as in some traditions Set is the twin of Horus.) At first, these tendencies existed in private, but, as the texts that turned up in the next century prove, they were widespread among the higher and more learned levels of the Church.

In addition to formal Satanism, the aftermath of the Black Death threw up another dark archetype, the vampire. Folklore of various cultures contained demonic beings who lived on blood, such as the Lamia of ancient Greece, but the undead human who drinks blood to maintain his immortality, controls the weather, and rules all rodents and other “children of the night” is a product of the post-Black Death mentality. The vampire and the Satanist represent the depth of psychic damage brought on by the Black Death. They are the new denizens of a post-apocalyptic reality. Six hundred years later, at the edge of the second millennium, Satanists are rock stars, with plenty of sympathy and taste, and vampire fashion is all the rage among teen-agers.

The Black Death was the end of the world. The ancient world and its medieval continuation came to a conclusion in the mid-14th century. The world went on, and the survivors tried to ignore the disaster, but in truth, everything was different. Many important secrets were lost and strange new forces surfaced to take charge. We are still living in the shadow of that apocalypse, and the forces it threw up are now in control of all our lives.