The Gnostic Science of Alchemy Chapter One 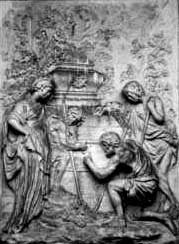 According to Zosimus of Panopolis, a fourth century alchemical apologist, the “sons of God” mentioned briefly in Genesis taught the alchemical arts to their human lovers in gratitude for having sex with them. Tertullian, an early Church Father, agreed with this and thought that these “fallen angels,” or Nephilim, had the evil intention of seducing human woman with the joys of “mundane pleasures.”

Zosimus was just repeating the accepted wisdom of the Jewish and Christian sages of that era. As he warmed to his subject though, Zosimus related the story of the first alchemist, Chemes, who wrote the teachings of the fallen angels in a book called Chema. The nephilim used this book to instruct the daughters of men in the spagyric arts and therefore the art itself came to be called Chemia. This was indeed the Greek word for alchemy, to which the Arabs added the article, al, of their own language.

As clever as this explanation is, like all statements in the study of alchemy, it should not be taken too literally. If we take it as a parable wrapped in a fable and disguised as an allegory, we would be closer to the truth.

“Al Chemia,” as a name for the substance of the mystery, is both revealing and concealing of the true nature of the work. “Al-khemi,” another Arabic derivation from the Egyptian for “the black,” also refers to the darkness of the unconsciousness, the most prima of all materia, and to the “Black Land” of Egypt. In this sense, we can see Zosimus’ “Khemes” as simply the “Black One,” or Osiris. (Perhaps even taken from Osiris’ original title of Khenti-Amenti, “Lord of the Western Darkness.”) His “Khema” is no mere book, but the civilization of Egypt itself, its monuments, history and literature.

What Zosimus’ fable seems to be telling us, then, is this:

In the dim pre-history of mankind, a god-like race of beings inter-bred with humanity and taught them creative and generative forms of cultural wisdom. The first human master of this science codified the canon of its knowledge (wrote the book on it we might say) from which the children of gods and men built an advanced civilization. As we know from the Bible, this civilization was wiped out by the great flood. But its wisdom survived to start a new pattern of civilization in Egypt, the Black Land of the wise Osiris.

Zosimus is suggesting therefore that alchemy is at the core of an ancient pre-deluge science, one that was revealed to mankind through sexual contact with semi-divine entities. Before we dismiss this out of hand as some sort of religious paraphilia, let’s look at what is possibly the earliest surviving alchemical manuscript, “Isis the Prophetess to Her Son Horus” found in the Codex Marcianus, a medieval (11th century) collection of Greek fragments. This work seems to be a unique blend of Hebrew mysticism and Egyptian mythology that could only have come from Alexandria early in the first century of the Christian Era.

Isis tells Horus that while he was away fighting and defeating Set, she was in Hermopolis studying angelic magick and alchemy. She relates that “after a certain passing of the kairoi and the necessary movement of the heavenly sphere, it happened that one of the angels who dwelt in the first firmament saw me from above. . .” The angel, a being of the lower realm between the earth and the moon, is enflamed by passion, but can’t answer her questions about alchemy. He bargains on another encounter by offering to bring a higher angel who will tell her everything she wants to know. The first angel shows Isis the magickal sign of the higher angel, a bowl of shining water and a moon sign that resembles the emblem of the moon-god Khonsu of Thebes.

After this oath, Isis is never to reveal the secret to anyone but her son, Horus, her closest friend. The knowledge will make them one, as the knowledge has now made Isis and the angel one.

And then a curious thing occurs. When the mystery is revealed, it seems strangely flat, as if something is left unsaid in the answer. Horus is told to watch the peasant, who may or may not have been the boatman Acharontos, and then is given a lecture on “as you sow, so shall you reap.” Horus is told to realize “that this is the whole creation and the whole process of coming into being, and know that a man is only able to produce a man, and a lion a lion, and a dog a dog, and if something happens contrary to nature, then it is a miracle and cannot continue to exist, because nature enjoys nature and only nature overcomes nature.”

Isis goes on to relate that she will now give the secret of preparing certain “sands.” She says that “one must stay with existing nature and the matter one has in hand in order to prepare things. Just as I said before, wheat creates wheat, a man begets a man and thus gold will harvest gold, like produces like. Now I have manifested the mystery to you.”

The instruction then passes to hands-on lab work in melting and preparing metals such as quicksilver, copper, lead and of course gold. At the end of this lengthy preparation, Isis exclaims: “Now realize the mystery, my son, the drug, the elixir of the widow.”