Soma and the Holy Grail 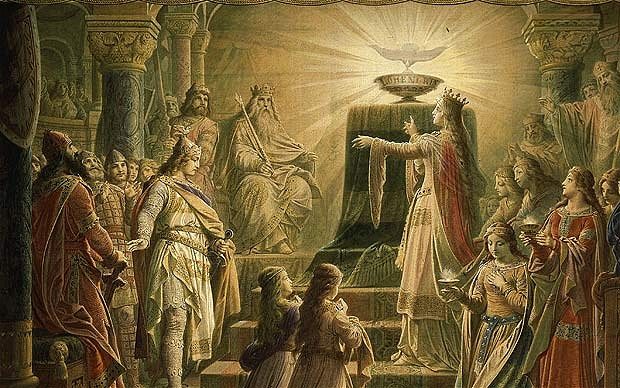 Followers of Holy Men and Saints seem to relish their downfall from their exalted position when they are accused of sexual misconduct. The latest in this long lineage is Sathya Sai Baba who has millions of followers who love Him because His mantra is that they too are as divine as He is.

As one who has had some personal experience with both Sai Baba and His main critics, who should not throw stones in glass houses and stand in judgment , I feel justified in examining the enigma in some depth. President Clinton and Jesse Jackson have been found guilty of sexual indiscretions, yet this time God is under scrutiny. Is nothing sacred anymore?

The VP?s of the Sathya Sai Organization have been concerned that He has not responded satisfactorily to the accusations so it was with some relief that Sai Baba gave a Christmas Day Discourse confronting the devotees who are indulging in false propaganda. He categorically denies any wrongdoing, while pointing out that ?Divine Personalities? are always persecuted. Just examine the lives of Rama, Krishna and Jesus to see how true this is.

There are some researchers, myself included, who see a parallel situation between the events that led to the war of the Mahabharata and those of today. We see that negative forces have infiltrated into the ruling classes who dominate our politics and religions; these same forces want to control our lives by suppressing the knowledge of our god-like powers. The good news is that invasions by negative forces provide the need for profound and ethical spiritual teachings to be reinstated into human society.

At the time of the Mahabharata, Bhumi, the earth-goddess, approached Lord Brahma and asked him to save the earth from the Asuras (negative forces). Brahm? responded by ordering the Devas (gods) to incarnate on earth to stop the influence of the Asuras. Brahm? also requested Lord Vishnu to appear on earth as an avatar and Vishnu appeared as Krishna, the son of Vasudeva and Devaki. Devas either impregnated the wombs of earthly women or entered into their wombs and produced children that played a part in the demise of the Asuras. This is probably the source of the Immaculate Conception although Christians make it clear that Mary?s womb was uncontaminated by Adam?s original sin .

With the aid of the Devas, Krishna gradually annihilated the forces of the Asuras. This involved many complex developments, and one of them the fratricidal struggle between the Pandavas and the Danavas is the main subject of the Mahabharata. In the struggle the celestial or nuclear war between the Devas and Asuras was re enacted on the earth and by Krishna?s supervision the forces of the Asuras were eventually defeated.

Little emphasis has been placed on the nuclear aspect of the war yet in the Vishnu Purana Arjuna?s chariot was traveling on some kind of road in outer space. To segue back into the present Sai Baba?s Discourse placed a great deal of emphasis on the Baghaved-gita and the dialogue between Krishna and Arjuna . Please visit sathyasai.org for the complete text.

Now let us bring some focus on the lesser known facets of sexuality which range from the biological and historical to the symbolic and spiritual. Arjuna is the son of Indra. In the Rig Veda, a more in depth version of the Puranas, Indra is the greatest of the gods and he is a Soma addict. Soma is the ? Celestial Dew of Ecstasy? a concoction of male and female love juices?.This dew seems to be a type of endocrine nectar believed to drip down from the pineal gland or pituitary glands, or both into the body when the body is sexually aroused, and it was believed that when drank it was the aid in achieving both immortality and enlightenment.

A goddesses? menstrual blood was called the ?The Astral Light’, being the ultimate source of manifestation, and in this regard it was directly equated with the mystical ‘Waters of Creation’ – the flow of eternal wisdom. Blood and sperm were the elixir of the gods. Male gods were invigorated when they drank a mixture of their sperm and menstrual blood and it was, they believed one of the keys to immortality. We can thank Judeo-Christianity for taking away the knowledge of one of our greatest gifts?the vital force of Soma, which consist of the fluids of life.

Priests, bishops, rishis, fakirs, yogis, and saints often had a kind of sexual ?carte blanche? and were allowed, or even asked and sometimes paid, to make love to any woman they picked out of the crowd or visited at her home. It was once believed throughout India in general that the blood, or rather the *semen, of sacred persons had generative powers.

It is against this background that we must view the information that since ancient times the holy rishis have been asked by nobles and kings to have intercourse with the latter?s daughters and wives, and that fakirs, yogis, and holy persons of all kinds were regarded as being free to make love to any woman.

Married women, although otherwise bound by strict moral codes, would go unpunished if their partner was a sacred person, a rule we meet also in the affairs of the gopis with the god Krishna. Gopis (Sanskrit., ?cow-girls?) were the legendary maidens of Krishna?s amorous adventures.

The most famous among Krishna?s favorites?is known as Radha. Most interesting is the fact that the gopis were mostly women whose absence from home and affairs with Krishna went ?unnoticed? by husbands, indicating perhaps that such extramarital affairs were no reason for concern and unrest. Such relationships, however, were denounced and tabooed by mainstream Indian mainstream society, so much so that a special group of teachings was developed in order to give sacred ritual status to such unlawful relationships.

Some interpreters make it sound as if the gopi?s love for Krishna was not physical and was solely an expression of devotion. Many scholars of comparative religion believe that there are many similarities between the lives of Krishna and Jesus?.Both had an immaculate conception, both died on a cross.

A Christian Think-Tank finds the similarities insignificant and the differences overwhelming: They find the warrior-images of Krishna are those of a worthy and noble hero-type yet are infuriated that Joseph Campbell and his ilk dare to make any comparison between the two. Was not Jesus a noble hero?

Obviously this Think-Tank would find Henry Lincoln, one of the authors of Holy Blood, Holy Grail, heretical for he finds it more plausible that a man should be married and have children, or that he should be born of a virgin, attended by choirs of angels, walk on water and rise from the grave. The authors maintain that Jesus married Mary Magdalene, had at least one child by her and her offspring made their way to southern France – then Roman ruled Gaul.

The Semetic scholar of Sumerian philology, John M. Allegro, of Dead Sea Scroll fame, might ire them further for his research revealed that Jesus/Joshua in its Greek form means ?the semen that heals or fructifies,? the god?s juice that gives life. When a Christian devotees were smeared with this powerful liquid they absorbed it into their bodies and were brought into living communion with God and felt divine. The practice of drinking divine juices aided the devotee in his desired ?direct access to God.? Men and women collected in their hands the mixed love juices of their union, sym­bolically offer them to their deity, and then proceed to drink and celebrate the Eucharist with their own sperm declaring it to be ?The Body of Christ.?

The words “Holy Grail” are a mistranslation of early French words for “royal blood,” and the true purpose of Prieure de Sion is to protect alleged royal descendants of Jesus and prepare the way for their accession to world power. It was for this reason that the Knights Templars were burned as heretics for drinking from the Rosi-Crucis (the Cup of the Waters identified as a red cross within a circle?the Holy Grail .) This Dew is connected with both male semen and the holy cross. Golden liquid is created during sexual union, which according to Taoist adepts is the inner alchemy instrumental in achieving longevity and even mortality. This liquid or subtle energy is created by the mingling and drawing into the body the secretions of both male and female practitioners. This leads to a mystical state of awareness and a merging of the individual with the all-pervading cosmic principle. Why wouldn?t the essence of life be sacred? And so the adage goes: There is nothing new under the sun; including sexual confusion and blasphemy against God.