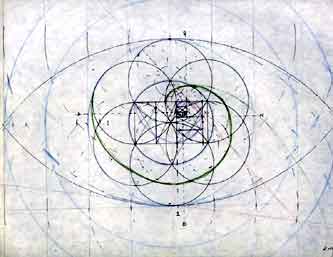 Esoteric, Geometric, and Symbolic writings, act as a “synapse” between the two polarities of intelligence. One finds that a clear logical exposition – be it architectural, scientific or mythological – will suddenly lift and expand into an immense interconnected thought field of an extra rational quality in which the multiple simultaneous meanings, while inwardly felt, may no longer be available to our rational mind.

Those unannounced fluctuations between our two primary nodes of knowing is at first disconcerting, but if one persists, sometimes without really grasping the idea, one can obtain glimpses of a new relationship between inner knowing and sensory based external analysis. ….. Robert Lawler ..Introduction to Symbol and the Symbolíque… Schwaller de Lubicz

The first seven stages in the Flower of Life Geometries sets the stage for the image to the far left. It is a ratcheted seed of life and suggests the tube Torus [viewed from the side – the smaller center image].

Nested ‘within, within two other withins is a Blavatsky metaphor that describes the recursion concept, suggesting that we are more than what meets the eye -and the surface- of our three dimensional thinking. It expands into a metaphor describing a Universal as well as a personal concept of individuation.

The Universal Mind in its habitation. As above, so below. Within, Within Two other Withins. 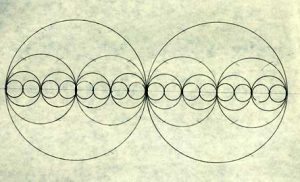 Our Consciousness created a binary world in which everything appears to be either on or off.

The Conjugal and nested wave of 3D begs to comprehend more information, but we have learned to deduct [the process by which we compare and subtract].

The obscure, instinctive call to individual freedom that lives in every person is constantly denied by the fear of isolation… Schwaller de Lubicz

This fear of isolation, the deduction that we do, and the way in which we seem to be either on or off perpetuates repetition and so we do it again and again. Redundantly with gusto and fervor! We actually nest in our memories within the thinking that something will come along and change us. Without fear, deduction and polarity, wisdom becomes the greater teacher, therefore we go within our other withins, certain that something is not going to come along and change us. We have nothing to discover outside ourselves, this is the axiom of the doctrine of the Anthropocosmos. 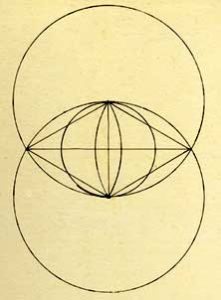 Results Oriented, the metaphor representing the Yen and Yang or the first male and female connection [right and left eyes of Horus] is the Vesica Pisces becoming the symbol for the First Light. First Light occurs at every instant without functioning inside the restraints of time.

A wonderful illustration of First Light was suggested by Beautiful Painted Arrow. An idea of Light would appear in your vision, becoming tangible and you could grab it. Seeing it is not enough, raising your hand and reaching for it brings wonderful results, while grabbing its essence and making it your own creates New Light.

The Ancient Egyptians called this phase of Creation ‘Mer’ which means Light. From the cellular to the Universal Mind it sustains the same continuity, design, and function.

The Trinity and Sacred Geometry

A remarkable and profound completion occurs when the third step in the Flower of Life Geometries is drawn. The third step begins to describe the nature of 3D as all of the flat plane surfaces of the Platonic Solids are described. The three surfaces include the triangle, square, and pentagon.

The question and the answer become one as Sacred Geometry and Metaphor join. The Universal Mind and the individual brain cell seems no different. We are not afforded the ability to compare and subtract, but rather to comprehend the vast Nature of Combining. Consciousness refers to Being, containing in itself its own opposition.

It is called the Magic Cube because it is the definition of 3D. It is important to note that the Ancient Chinese wrote the I Ching according to this Magic Formulation. Being the 8X8 or 64, the I Ching provides instruction for existing in the Third Dimension. By this simple suggestion, the I Ching offers clues to other dimensional qualities of Life.

Light appears as the fundamental principle of relatedness. We define Light as part of the Wave Form Universe in which we exist. The cosmic wave from space is the smaller wave and the long flat wave from our brain is the larger wave. In between are multitudes of waves that intermix and define x-ray, heat, color, sound, electricity, and ultraviolet [among many others]. The mixture is of course the Matrix of Metatron. 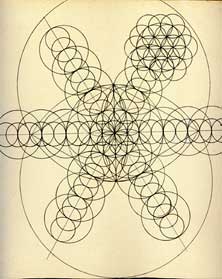 Metatron’s Cube represents the gridwork of our consciousness and the framework of our Universe. It is the Matrix in which everything is contained in our three dimensional being.
Inside the Vesica Pisces is represented the Seed of Life, but take into consideration how many Vesica Pisces [Light] exist in Metatron’s Cube. For every female concept, there is a male concept combining to create Light at every junction.

The recursion concept displays itself even more when one takes into account that we exist within the gridwork. Each and every part of our being and our Universe is contained within the gridwork that we know as Metatron’s Cube Octa.

Magic and Alchemy start here, with the idea that there is another realm of conscious attainment. 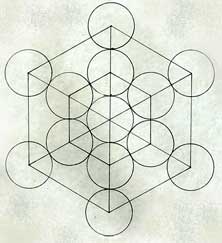 Metatron’s cube ultimately represents Magic, Alchemy and containment. Among its attributes are the three directions of up and down, side to side, and front to back, with the concept of a cube within a cube.
At the center of the world, which is also man, there is a synthesis, an equilibrium of the six directions that is of the three spatial sections and a neutral center. AOR

It is the ultimate Magical container. It is The Box and the Incubator in which breeds the Putrefacation of the seed of First Light, the concept by which we believe in death and resurrection.

Metatron and Eve’s Grid A question and answer dialogue describing aspects of the Flower of Life, Metatron, and more detail about the Tesseract.

Sacred Geometry and the Box.
The Tesseract Drawing comes from a book published in 1928 entitled “Theosophy and the Fourth Dimension” by Alexander Horne.

Incubation is the luxury of knowing that we will repeat our lives, lessons, and achievements whenever we pass on to the other world. It is a luxury that is cherish. It was afforded us by the belief in death and resurrection.

The Ancient Egyptian belief that we have the ability to become a star in the Universe is a bit different. Expanding on the belief that we can Ascend to another consciousness, Alexander Horne offered the drawing to the left in 1928, suggesting that we can become fourth dimensional. His instruction includes a process by which we are able to view fourth dimensional consciousness by going into and perceiving a section of the cube that we otherwise would miss.

Pythagoras was a rebel, so they say, and kept the Dodecahedron a secret. His purpose, it seems, was to keep the secrets of the Universe from the common folks, or perhaps the religious leaders, because it yielded consciousness secrets, that if discovered, would change the histories and the way in which we viewed our own Mortality. There is a huge question about what else our early Ancestors decided to keep secret.

If there is a pathway ‘Out of the Box’, then truly the Golden Mean Energy holds the key. 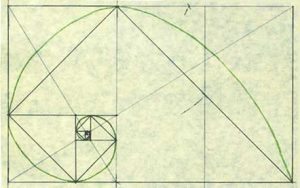 The relationship between the Golden Mean and the Dodecahedron is fractal in nature (Left). The spiraling lines of Golden Mean that come from center, intersect the corners of the Dodecahedron, creating reinforcement to the idea of their interrelationship. Viewed from the top (Right), the intersecting spirals cross at a point which defines the pentagon, or five sided surface.

The magical symbol of the five pointed star develops from this geometry.

It is fractal because each pentagon recurs at a ratio of .618 to 1 (Phi ratio or Golden Mean), infinitely in and infinitely out. 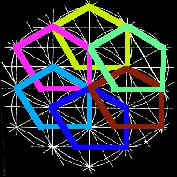 By placing a grid work onto the Seed of Life, one can replicate the Geometry of DNA. The relationship suggests a fractal in the Phi proportion (.618). Two of the Pentagons have been deliberately omitted so that the image would be more lucid for viewing.
The resulting metaphor describes consciousness, containing that which is visible and that which has potential. Life’s metaphor is similar.

“Any sufficiently developed skill or technology is indistinguishable from magic (Arthur C. Clarke).” 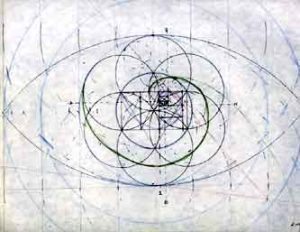 First I must say that the drawing to the left is incorrect, but perhaps one of my most important drawings. The copy you are viewing is the seventh in a long line of study drawings, the first being at about age nine with the help of my Dad. He, like Pythagoras, felt that some images were for study and understanding, and perhaps not for publication. He also felt that mistakes were a part of the understanding of Sacred Geometry.

Dad would actually look at me similarly to the way in which he was captured by the camera (Right). It was like he was saying to me, “OK you have to get this”. He offered me no breaks while expecting full understanding. I began the study of Sacred Geometry with him at the age of seven and continued for the remainder of his life. He died in my arms in 1989, while three days earlier, we drew a facsimile (sixth copy) of the drawing above, only it was the first time we had drawn it correctly. After having completed the drawing and enjoying the time together, we destroyed it.

Ancestors have a tendency to be remembered only a few years back unless there is a great reason in history for records to be kept. While families pass on these records verbally, there are few who actually write about them. It is my pleasure to dedicate this page and the rest of San Graal to the wonderful memory of my father, Ray Stevenson Flowers, Sr. who unwittingly taught me the intricacies of Sacred Geometry by simply spending the time drawing and describing the many facets of a world of metaphor built around the use of a compass and a straight edge. He also coined the term Phi Harmonics due to a small plastic flute that he gave me when we thought about playing the music of Phi (in connection with the drawing above).

I would also like to thank Drunvalo Melchizedek for his teachings about the Flower of Life and Sacred Geometry in general. It was Dru who taught me to remember the teachings of my father.

All images by Donald Rose, Jr. except where noted with much help by those who were teachers.

You can read about the free Americas Cardroom download at https://pokercasinodownload.com/americas-cardroom-download-bonus-code/

Very interesting article. I was thinking about that cube within the cube, Tarot and Qabalah...and looking for more information about the symbolism of the Tesseract. I am grateful for your article. May I provide a link to this on my blog?

Do you have any idea what it means to see a Metatron Cube floating? It was bright white at all corners and it was moving like in many infinity cycles