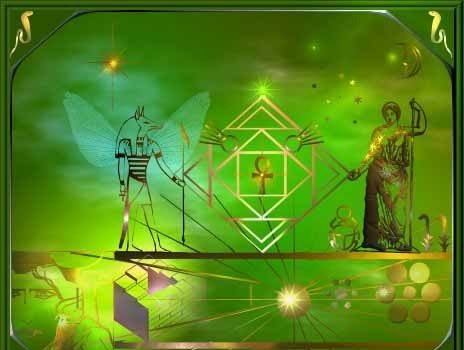 Subject: The Secrets of Thoth

Hi John –
this came off another list and I wasn’t sure if you had seen it
or not. You have such a wealth of information I thought I’d
forward it to you if you haven’t seen it.

I got it off the Giza list. F The Secrets of Thoth — By Paul White

*Just after the Deluge, at the dawn of the present time cycle,
an era the Egyptians called ZEP TEPI, “The First Times”, a
mysterious group of “g-ds” appeared, to initiate the survivors in
the rudiments of civilization. From Thoth and Osiris in Egypt, to
Quetzacoatal and Viracocha in the Americas, traditions worldwide
subscribe the origins of contemporary civilization to this
sophisticated group*. Despite the misleading popularity of Von
Danikan journalism, evidence from around the world, indicates
these people were the hi-tech survivors of the previous
civilization. Like the nuclear survival bunkers and secret
research facilities of our own civilization, there were those who
arose from the underground “cities of the Go-s”, after the dust
settled. They were the “prediluvian patriarchs”, like Enoch and
Methuselah, the “giants and heroes of old”, mentioned in Genesis.
The enigmatic -ods of ancient Summer, Egypt and India, all hail
from the fabulous times before the Flood.

Since the declassification of the new ground-penetrating radar
2 years ago, the most staggering data has emerged of complex and
labyrinthine underground systems in various parts of the world.
At places like Guatemala in the South Americas, tunnels have been
mapped under the Mayan pyramid complex at Tikal, which extend a
full 800 kilometres to the opposite side of the country.
Investigators remarked, it was possible to understand how half a
million Mayan Indians escaped the decimation of their culture.

In similar fashion, the SIRA radar was deployed in Egypt as
early as 1978, mapping an extraordinary subterranean complex
beneath the Egyptian pyramids. Arrangements made with President
Sadat of Egypt, resulted in three decades of top secret
excavations to penetrate the system. At a recent meeting in
Australia, one of the key scientists on the Giza project, Dr. Jim
Hurtak, showed film footage of work in progress called, CHAMBERS
OF THE DEEP, due to be released at the end of the century.

The film reveals the discovery of a vast megalithic metropolis,
15,000 years old, reaching several levels below the Giza plateau.
While the rest of the Nu-Age speculates about a hidden chamber
under the left paw of the Sphinx, the legendary “City Of The
G-ds”, lays sprawled beneath. Complete with hydraulic underground
waterways, the film shows massive chambers, the proportions of
our largest cathedrals, with enormous statues, the size of the
Valley of the Nile, carved in-situ. Researchers, risking their
lives with lights and cameras, carefully negotiated rubber
dinghies across subterranean rivers and kilometer-wide lakes, to
penetrate sealed chambers beyond. Already, remarkable caches of
records and artifacts have been found.

It is the legacy of a civilization and a technology way beyond
our own. A technology capable of creating a vast underground
city, of which the sphinx and pyramids are merely the surface
markers. The project scientist, Dr. Hurtak, likens it to the
impact of contact with an advanced extraterrestrial culture. He
described it as the discovery of the Fourth Root culture, the
so-called Atlantean civilization, destroyed by the last earth
tumble. It presents unequivocal evidence that all languages,
cultures and religions trace back to a single common source,
which Dr. Hurtak refers to as the “Parent civilization”.

The technology unearthed is way beyond machine technology, as
we know it. As Arthur C. Clark once joked, “any technology beyond
our own would seem like magic to us.” According to Dr. Hurtak,
this was a culture who cracked the genetic code and possessed the
keys of the physical spectrum, the “Higher Light Physics” of the
ancients… everything old Gilgamesh went searching for in his
famous trek to the lost “City of the -ods” to search the tunnels
beneath “Mt. Mashu” in the desert lands. Hurtak refers to a
“language of light” and a great priest-scientist of the previous
time cycle, named ENOCH, who is associated with the building of
the Great Pyramid complex. Hurtak alludes to a grand spiritual
science, a science which describes a genetic stairway to the
stars.

The priest-scientist ENOCH, is a prediluvian patriarch, one of
the most famous and seminal characters of the previous time
cycle. Father of Methuselah and great grandfather of Noah, Enoch
is credited in the B-ble as architect of the original Zion, the
legendary “City of Yah-eh”, as well as inventor of the alphabet
and calendar. Enoch is also history’s first astronaut, who “is
taken aloft by the Lord” and shown “the secrets of earth and
heaven”. He returns to earth with the “weights and measures” for
all humankind.

Known to the Egyptians as THOTH, the “Lord of Magic and Time”
and to the Greeks as HERMES, “messenger of the -ods”, he is even
remembered in the Celtic tradition as the enigmatic wizard
Merlin, who disappears up an apple tree to mythic Avalon, seeking
the secret of immortality and vowing to return.

As one who attained immortality, the secret of how we “might
become as go-s”, Thoth/Enoch promises to return at the end of
time “with the keys to the gates of the sacred land.” In the
controversial Dead Sea Scrolls, revealing the lost Books Of Enoch
removed from the Bi-le by early religious leaders, Enoch
describes a wondrous civilization in the past, who misused the
keys of higher knowledge and were unable to save themselves from
the last cataclysm. Both literally and figuratively they lost the
“keys”, they lost all higher knowledge.

Yet, Enoch, along with many traditions, even the Mayan legend
of Quetzacoatal, promises a return of this knowledge at “The end
of time”, the end of the present time cycle. Bi-lical Revelations
promise “all will be revealed” at the end of the present world.
The extraordinary discoveries in Egypt and other parts of the
world, describe not just an advanced technology but, evolutionary
path beyond our present state. Careful scientific examination of
the world’s key pyramid sites, reveal them to be sophisticated
harmonic structures, not only mirroring positions of the planets
and stellar systems but, designed to mimic the chakras and
harmonic cavities of the human body. Even each stone within the
Great Pyramid is harmonically tuned to a specific frequency or
musical tone. The sarcophagus in the center of the Great Pyramid
is tuned to the frequency of the human heart beat.

Astonishing experiments, conducted by Dr. Hurtak and colleagues
at the Great Pyramid and other sites in the South Americas,
demonstrate the pyramids to be voice-activated “geophysical
computers.” Intoning specific ancient sounds, the scientific team
produced visible standing waves of light, above and within the
pyramids and were even able to penetrate, hitherto, inaccessible
chambers. Subsequent discoveries indicate the ancient
priest-scientists employed some sort of harmonic sound technology
within the temple structures.

The lost Enochian knowledge reveals the mother tongue as a
“language of Light”. Known to the ancients as HIBURU, it is the
primal seed language, introduced at the beginning of this time
cycle. Modern research confirms, the most ancient form Hebrew to
be a natural language, the alphabetic forms emerging from the
phosphene flare patterns of the brain. The same shapes, in fact,
born of a spinning vortex. It is a true language of light,
coursing through our very nervous system. j Encoding the natural
waveform geometries of the physical world, Hiburu is a harmonic
language, mimicking the waveform properties of light. The “keys”
Enoch speaks of, turn out to be sound keys, keys to be vibratory
matrix of reality itself, the mythic “Power of the World”. The
Enochian knowledge describes sonic equations, encoded within the
ancient mantras and go- names, capable of directly affect the
nervous system and producing profound effect of healing and
higher consciousness states.

As the ancient texts declare, “If you would speak with the -ods
you must first learn the language of the g-ds.”

DNA, the ancient cabalistic “Tree Of Life” portrayed in the
B-blical Torah, is now coming to be viewed as a live vibrating
structure, rather than a fixed tape recording. Many modern
scientists, regard DNA as a shimmering, waveform configuration,
able to be modified by light, radiation, magnetic fields or sonic
pulses. The legacy of Thoth/Enoch suggests this “language of
Light”, the harmonic science of the ancients, could actually
affect DNA.

The evidence in Egypt, indicates this was the grand 6,000 year
genetic experiment attempted by the Egyptians, the quest for
immortality and the stars, a quest described by the great ones of
old, a quest initiated by Gilgamesh so very long ago. The
Egyptians were not fixated on the afterlife, as thought by early
Chr-stian translators but, focussed on creating a higher type of
human. Along with many ancient cultures, they believed DNA came
from the stars and was destined to return.

The knowledge of Thoth/Enoch implies humans are meant to evolve
beyond our present terrestrial form, as the Bib-e tells us, “we
may become greater than angels”. The Egyptians record stories of
the “Star Walkers”, occasional individuals who, like Enoch,
travelled “beyond the Great Eye of Orion” and returned, to walk
like -ods amongst men. Despite the bleaching of semi-divine
beings from modern consciousness, could it be possible, as the
ancient texts insist, we are destined to “become as go-s”? Are
the Mayan “Lords of Light” and the Egyptian/Tibetan “Shining
Ones” really a higher form of human?

According to many earth legends, such beings are supposed to
return regularly, at the beginning and end of each time cycle,
the 13,000 year half-point of our solar system’s 26,000 year
zodiacal orbit around galaxy center. Because of conditions on our
galactic orbit, these 13,000 year intervals or “worlds”, seem to
be separated by cataclysmic upheaval.

According to the “calendar in stone” of the Great Pyramid,
which describes the so-called “Phoenix Cycle” of our galactic
orbit, the present time period ends (converted to our present
calendar) in the year 2012 AD. The Greek word PHOENIX, derived
from the Egyptian word, PA-HANOK, actually means, “The House of
Enoch”.

The Enochian knowledge suggests, these regular cataclysmic
changes act as an evolutionary agent provocateur, to quicken the
resident life forms to the next evolutionary phase, prior to
exodus from the womb planet. Human evolution may proceed more
rapidly than previously thought. The evidence now appearing,
records civilizations before us, who mastered the physical
continuum and progressed beyond this world. There were also those
who failed. We, too, have equal opportunity to make it or break
it.

The discoveries emerging from Egypt, describe the existence of
a world wide pyramid temple system in prehistory, mounted like
antennae on the key energy meridians, which were employed by
ancient priest-scientists as a musical system to stabilize the
tectonic plates of the planet… cataclysmic geology at it’s
finest. From the mother tongue word JEDAIAH, meaning “the way of
the Word” or “the power of the Word”, the ancient JEDAI priests
used the language of Light to tune the planet like a giant
harmonic bell. Much is being rediscovered in the last days of
this time cycle. In the words of Dr. Jay Franz, of the Omega
Foundation, “even if we don’t dare to name it, there is a
universal feeling of something impending on the world stage.”

JW As Art Bell would say, “We are going into the Quickening.”

Create your own review
Average rating:   1 reviews
Kimberly
by Kimberly
Thank you

This article has changed my life! I have never read something that has put how I feel and what I think into words! Please send me more!!!